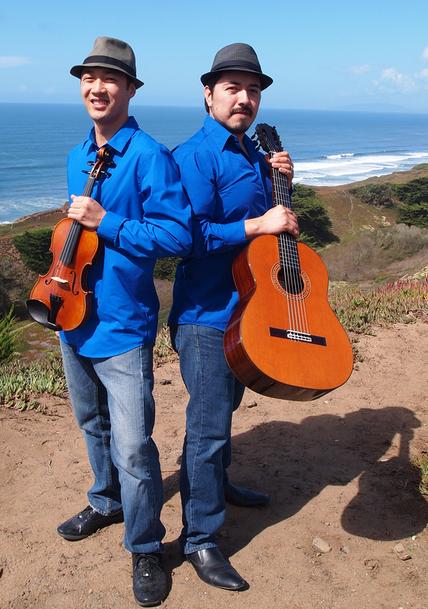 "Duo Revirado is a fine, mature ensemble. They obviously enjoy playing together, and their concerts are fun and exciting."
-David Tanenbaum, Renowned Guitar Collaborator & San Francisco Conservatory of Music Professor

"It was a great collaboration that the Santa Rosa Symphony experienced, largely due to Duo Revirado’s excellent musicianship and entertaining style of performing. Their performance in the Latin Waves Festival received an enthusiastic standing ovation from an appreciative audience. I highly recommend them for being exceptionally gifted performers with the ability to effectively communicate and share their music with an audience.”
-Timothy Beswick, Santa Rosa Symphony Director of Artistic Operations

In 2005, Thomas Yee and Jose Rodriguez teamed up to create Duo Revirado; a dynamic and unique ensemble that explores different styles and genres including Classical, Latin, Tango, Jazz, Folk, Our Arrangements, and New Music. Audiences experience Music of a wide spectrum that includes extended techniques and improvisation. The mission of Duo Revirado is to branch out to a broader audience, with a vision of creating music that will excite, inspire, and communicate positively with everyone. The duo, like any chamber ensemble intends to search for projects that allow us to perform and also collaborate with musicians, expanding our community.

Duo Revirado has been performing to ovation and acclaim throughout California and Mexico, and highlights have been two projects with the Santa Rosa Symphony’s Latin Waves Festival, where they collaborated with Tango Dancers and Symphony Chamber players to create a multi-media performance experience in addition to performing as a duo. Other notable collaborations have been several San Diego County Library Concert Series featuring their Tango Extravaganza, where they performed to groups of wide eyed children and adults, many of which have never experienced such a combination of instruments. The duo has done projects at Universities in Baja California in Tijuana and Ensenada, Mexico. In 2009, the duo performed at Santa Barbara Symphony’s 2nd International Guitar Festival, where Duo Revirado added their stamp along with other notable groups such as the esteemed L.A. Guitar Quartet.

Duo Revirado began collaborating while completing studies at the San Francisco Conservatory of Music, and has transported them from classrooms and cafes to the concert hall. In 2007, the duo released their debut CD of Spanish/Tango Music titled "Historia," which is for sale on the recordings page. Currently, Duo Revirado became an affiliate of the San Francisco Friends of Chamber Music, which is non-profit organization dedicated to the service of chamber music in California. They have been in the works on a 2nd recording project in addition to concertizing in the Bay Area and abroad.